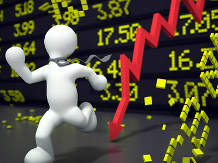 Even for those who aver that volatility is an inherent part of stock markets, the recent stomach-churning gyrations have been a tad too much to handle. Those who gloated that they had decades of experience, suddenly appeared like novices. Media mavens desperately searched for 'experts' who could provide a few comforting words of wisdom, but unfortunately, the search for oracles proved fruitless.

While the latter half of August 2013 was a text book case of gloominess, the sun suddenly shone in September and today we are nearly back to where it all began. However, scores of shell-shocked investors and speculators are suffering from Post-Traumatic-Stress Disorder (PSTD) in a figurative and financial sense.

Let us look at some of the steps one can take in such a scenario.

Diversify your portfolio within the same asset class: Concentrated portfolios can offer outsized returns during good times, but can decimate wealth when the tide turns. For instance, the fall in the rupee meant that those who were overweight in interest rate sensitives like banking stocks or real estate stocks lost a lot, while those who purchased shares of export-oriented companies were beaming. However, since we cannot know in advance as to which sector or stock will perform, the best strategy would be to diversify across different sectors. Equity mutual funds could help you achieve that. Even in this current fall, several schemes fell less than the broad indices thereby sparing their investors a lot of heartburn.

Even in case of debt investments, while those overweight on income funds lost money, investors in short-term fixed deposits or ultra short-term debt funds benefitted from the spike in short-term rates. Diversification would have helped out here too.

Diversify across asset classes: While equity investors were weeping, those in gold Exchange Traded Funds were beaming and investors in real estate were more or less neutral. Six months ago, investors in gold were losing heavily, while those in equity were gaining. In a nutshell, considered diversification across asset classes helps in protecting one's net worth, even though one may have to give up outsized gains at times.

There are no experts: Do not base your investment decisions on the words of 'market-experts', as there are none. Many of these will only be able to explain why an event happened rather than predict what is going to happen.

'Rare' events are actually common: Do not get unduly perturbed by various random events. Such events can, and do, occur quite frequently. The best way we can handle these is by matching our investments to our goals so that equity / real estate investments only go towards meeting long-term goals and debt investments cater to near-term goals.

Do not leverage: Leveraging drastically reduces your ability to hold on to investments during difficult times. Hence, it is wise to eschew it altogether.

What led to the fall 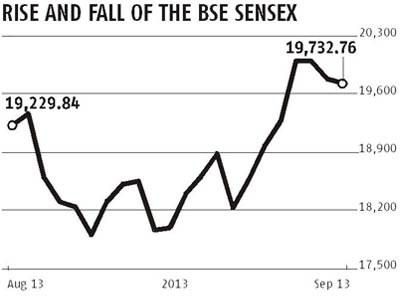 The current RBI Governor had used the words 'Perfect Storm' to describe the confluence of events which precipitated the 2008 crisis. The unholy trinity of the weak Indian Rupee, capital outflows and a weak macro-economic scenario led to our own perfect storm last month. Cause and effect mingled with one another, resulting in a snowballing slide. Also, Ben Bernanke's indication that the flow of money would be turned off gradually, led to a global sell-off across markets of all hues (stocks, bonds, commodities and forex) as they realised that the go-go days may be coming to an end.

FII impact: The sad fact that Indian markets are beholden to FIIs was once again brought into stark relief last month. But this time it was a double-whammy as the stock and bond markets were subject to indiscriminate selling. In fact, bond markets fell first, as relatively recent FII debt investors stampeded towards the exit door. The stock market fell more as an afterthought, though it was no less severe.

Current account deficit: India has yawning deficit which has always been funded either through debt or equity capital inflows. Whenever the appetite for emerging markets wanes, we face the hazard of a shortfall in such funding. Some of the ostensible 'capital-control' measures which were announced, also led to heightened fears among foreigners, and dampened sentiment.

The rupee: The fall in the rupee led to accelerated selling by FIIs whose dollar denominated returns were imperilled. Demand from importers added fuel to the fire.

In other words, whatever could go wrong, did go wrong. Indian mutual fund and equity investors were caught in the cross-fire and suffered as a result.

So what led to the revival ? Frankly, the causes are hard to fathom. Some attribute it to Raghuram Rajan's verbal abilities, others say it was due to short-covering, etc. The virtuous cycle fed itself, with a token amount of bottom-fishing by a few FIIs resulting in the rupee stabilising, which in turn led to further investments, as the catch-up rally gained pace. Today, we are back to nearly 6,000 on the NSE Nifty, a figure which was in the realm of fantasy just two weeks ago.