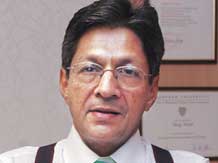 After college, I joined an entrepreneurial course that, among other things, required me to plan a project and give a report. I chose to research and give one on Laminated Plastic Collapsible Tubes. The idea was summarily rejected by the professor as being unviable. The reason: There were many rats in India and if toothpaste was stored in such tubes, the rats would chew these. Thus, it was inconceivable that aluminum tubes could ever be substituted with plastic tubes.

Dejected, I shared my sad story with my mentor, Chandrakant Sampat, who concluded I was not fit to start an industry. His reason for stating this was very different, however.

He agreed I understood businesses but contended there was a better way to participate without subjecting myself to the vagaries of raw material shortages, regulatory capriciousness and so on. Instead, I could choose to participate in a bouquet of businesses by investing in companies listed on the stock market. If ever the fortunes of the businesses change, just sell the stock. This could not happen in an Indian manufacturing concern, where closure was as difficult as starting up. These words of wisdom led me to the stock markets.

I entered the markets in 1978 as a sub-broker and started researching companies. I spent most of my time in a shareholders' library which stocked the balance sheets of companies. It was a small, 1,000 sq ft room on the third floor of Bhupen Chambers on Dalal Street. In 1983, I became the member of the Bombay Stock Exchange. The membership was financed by the sale of my mother and wife's jewellery.

Quite early into my career, however, I felt I was not genetically cut out to be a broker. I believed in buying a business and not a stock that would go up or down. That is why I never believed in speculation or encouraged it. This limited my client base and doing business this way was not viable. An entry into institutional broking was, therefore, imperative. But because this segment was was controlled by a select group of brokers. I needed to do something very different. I would, therefore, send my analyses on companies, articles from international magazines and talk about businesses rather than stocks. This was my edge to gain a toehold in the business.

Then, in the early 90s, we saw the entry of foreign institutional investors and indian mutual funds. The competition increased and so also the number of brokers with the entry of the National Stock Exchange. This was a big inflection point for me. I saw the cheese moving.

The markets had become very dynamic and volatile. Fund managers wanted ideas (often a euphemism for inside information) that could earn them instant profits. No one was interested in long-term value investing. Everyone was in a hurry to show short-term performance. Consequently, I started losing market share.

A time came when I had to choose between doing the right things or merely doing things right. I chose the former - by sticking to the long-term value investing process. Soon after, I started a Sebi-registered Portfolio Management Scheme (PMS) in 1996. I was happy that at least I would now be able to follow the right investment principles with my clients. We performed exceedingly well for our clients, who all had a long-term view in mind.

The year 1999-2000 was another inflection point. Clients would ask about an information technology stock and I would advise them to sell, as it was highly valued. They would come after a week and say they did not sell and the stock had doubled. This went on for a year. I would advise and go wrong everyday. My PMS scheme saw redemptions because they mostly had fast-moving consumer goods stock and not technology stocks.

I suffered depression and not sure whether the world was going too fast and I was lost or whether I was the only smart guy and the world was mad. My dear friend, Shantanu Nagarkatti, advised me to pursue the study of behavioural finance and reinvent myself. One day, while reading The Economist, I came across an advertisement for a course called 'Investment decisions and behavioural finance' at the Kennedy School of Government at Harvard. I enrolled myself and took off. Thus started my entry into the field of behavioural finance. Armed with this new knowledge I was more confident about dealing with the stock markets. My interest led me to author two books, Stocks to riches: Insights into investor behaviour and value investing and behavioural finance: Insights into stock market realities.

Around 2007, I decided to take the tough decision of abandoning what was not working. Subsequently, I wound down the institutional broking business. In 2013, I closed our PMS scheme and the retail broking arm, and surrendered the memberships of BSE and NSE. No, the journey was not ending. It was merely changing course.

We saw great opportunity in the mutual fund space. The cheese was moving there. We launched our New Fund Offers in 2013, in spite of being warned that the markets being lacklustre, it was not the right time.

Being value investors, we were excited that the markets were offering good investment opportunities. Till date, we have done reasonably well for our investors.

Over time, we have grown organically and guided by the universal principle of the law of the farm. You cannot sow today and reap tomorrow. The same principle applies to our investment process.