Equities can scare you, but will not kill you

Various theories are doing the rounds, myriad reasons are being put forth and extrapolations are rife. How nice it would have been, if we had only received such 'wisdom' a week ago. In reality no one knows what is happening or what is going to happen. So let us keep our emotions under control and stay invested.

Of course when I say this, I underline the importance of choosing good companies, run by a credible management, having a good moat around them and requiring minimum infusions of capital. Two other vital characteristics include : low indebtedness and pricing power. If you have entered the stock market as a speculator and bought the fancies of the market, I have no comments. 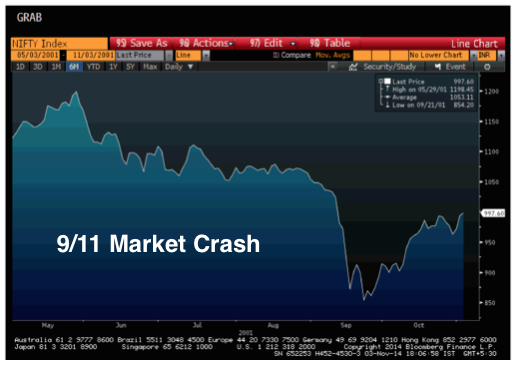 Is this not a scary fall? We all had become nervous when the 9/11 happened although this did not happen in India. But it did have a contagious effect. The next chart is scary too. This was the time that the NDA government lost the elections. This happened in India and the markets tanked. Now try to identify these falls in the chart below. Where are the steep falls which had made investors jittery? See the chart below. 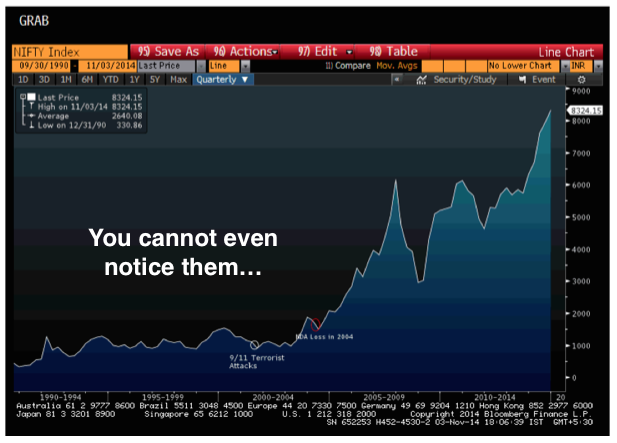 So what once seemed to be a major fall, over a period of time it seems very insignificant. Moreover the markets thereafter have also gone up.

What gives you an illusion of safety can kill you. See the chart below. 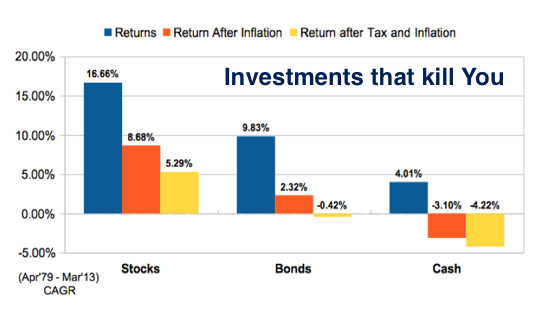 Had you been invested in fixed income securities you would have been a loser. The vagaries of inflation over time would have depleted your purchasing power. So what seems safe and secure may not be so.

The Sensex commenced in the year 1979, with a value of 100. An investor who invested then would have witnessed turmoil in the markets owing to events like the assassination of two prime ministers, the Kargil conflict, the near bankruptcy of India in 1991, the Harshad Mehta scam, coalition governments, the tech bust, the global meltdown etc. Despite all these catastrophes, the Sensex currently hovers around 26500.

In terms of wealth accretion, an investor who invested Rs. 10 lakhs in the Sensex in 1979 would have amassed over Rs. 26 crores today. That is the power of compounding. In other words, even after all these turbulences he is better off.

Now lets see what inflation does to us. In 1980 one could buy a three bedroom apartment in a good locality in South Mumbai with Rs. 10 lakhs. Today with that money one cannot even buy a parking space.

Had he kept his money in fixed income securities thinking of safety of his money he would have earned interest but the capital would be worthless. Every year the purchasing power of the interest would be going down due to inflation. Investors should understand that it is long term equity investing that will pay. Equities not only help you retain purchasing power, but also help you increase it. That is the reason, they are viewed as the best hedge against inflation.

Equities as an asset class have done well but the investors have done poorly. The reason is simple: Investors inability to control their emotions, coupled with having a short term outlook. Harnessing one's emotions and maintaining a long-term view, is the foundation to creating wealth.

The original article could be seen here. comments powered by Disqus